Posted by Dane Jackson on April 29, 2013
Posted in: books. Leave a comment

If you’re a frequent reader of my blog, then you know my love for the Ex series by Peter Clines. With that series, he’s blended two of my favorite things: super heroes and zombie fiction. Set in zombie apocalypse Los Angeles, a group of superheroes lives amongst a group of survivors, serving as their protectors and providers. In the first book, Ex-Heroes, the group of heroes had to battle zombies, as well as a gang that was quickly trying to amass power. Ex-Patriots opens with the gang joining in on the ranks of the survivors. Aside from staying safe from zombies, the heroes need to deal with the conflict between the survivors and their acceptance of the gang members who tried to take them over earlier, as well as the need for new supplies. Things get a little more complicated when a military drone is spotted while on a supply run.

As it turns out, the military was working on a super soldier program (thing Captain America I suppose) and all of the soldiers in “Project Krypton” survived the apocalypse. Ex-Patriots, written likes Ex-Heroes, tells the story between “then” and “now” vignettes, and the scenes showcasing the evolution of Project Krypton were especially horrific…in a good way. 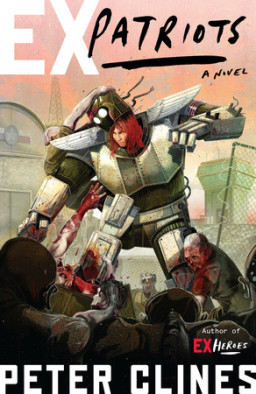 As much as I loved Ex-Heroes, I liked Ex-Patriots even more. Peter Clines is at the top of his game and I just can’t wait to see how he concludes his trilogy with Ex-Communication. One of the elements I really liked was how Clines spent time developing some of the regular humans in this novel. In the first book, most of them felt like they were just there, but in Ex-Patriots, they’re given much more personality and characterization, which enhances the story even more. Specifically, I like the folks who become increasingly nervous and skeptical about the superheroes and what they off the overall group.

I don’t want to say too much, because Ex-Patriots is a book that needs to be enjoyed.

So, it’s here where I offer one lucky reader from the US or Canada a chance to read a signed copy of Ex-Patriots. Just like last time, all you have to do to enter the contest is to fill out the form below (and fill out your twitter handle for an extra entry). A winner will be chosen on Thursday, May 2, 2013 at 9:00 PM. The winner will be chosen at random. Also, if you won a copy of Ex-Heroes, you’re ineligible. Good luck!

In the meantime, here’s an excerpt from Ex-Patriots.