Ex-Heroes by Peter Clines was the first book I ever read from Permuted Press.  I’m not sure why it took me so long to start reading books from Permuted.  They specialize in zombie and apocalyptic fiction (two of my favorite genres), but there was some unexplainable force causing me to resist for some reason.  The barrier was broken when Ex-Heroes entered my life.  A few of my friends recommended it, so I put it on my “I’ll read it one of these days” lists.  It features superheroes and a zombie apocalypse.  How could you go wrong?  Some time went by and it slipped my mind until I was browsing the shelves of a bookstore.  There it was.  I had some extra cash in my wallet, so I decided to give it a chance.  After I started reading it, I couldn’t put it down.  Ex-Heroes was pure escapist fun.  I became a cheerleader for the book and even started following Peter on Facebook.  One thing led to another and I’m proud to host Peter for today’s Friday Five.  The stars seem to be in alignment for Peter these days.  Broadway Books has recently picked up the Ex series (Ex-Heroes, Ex-Patriots, and Ex-Communication) and are about to re-release the first in the series next month.  Hopefully, this will help Peter gain a much larger audience.  He deserves it.  Coincidentally, Broadway released the new cover for Ex-Heroes this week, so I linked it below.  It has an almost pulp fiction comic/manga cover type feel to it.  Works for me!

If you’re not familiar with Peter Clines, then now’s your chance before his popularity grows even more.  Read his answers below so you can say you knew him when.

If I haven’t done enough to intrigue you just yet, maybe Nathan Fillion can be of assistance.  He said the following about Ex-Heroes:  “My two favorite things, zombies and superheroes. Hurry with the sequel to EX-HEROES!”

1)  You got your start in the world of cinema.  How did your experience as a screenwriter help you as a novelist?

I think I lucked out because I was working on film crews as a prop master while I was trying to get a screenwriting career going.  It meant I got exposed to hundreds of screenplays with the added bonus of actually seeing how they were interpreted on set.  I think a lot of would-be screenwriters don’t consider that there are a hundred other people the story’s going to be filtered through before it’s actually seen, and it was clear really quick what made for a good script and a bad one.  I worked on a few shows where I can remember everyone in the office groaning when a new episode would show up and we’d see writer X’s name on the cover.  So it made me very aware that a writer—any writer—needs to be aware of who their audience is and how they’re going to interpret things.

Screenwriting is also very concise, so it taught me to try for maximum impact with minimum words.  I may write a loose first draft but I cut the hell out of it in later drafts.  Especially with action.  I’m a big fan of tight, fast action. 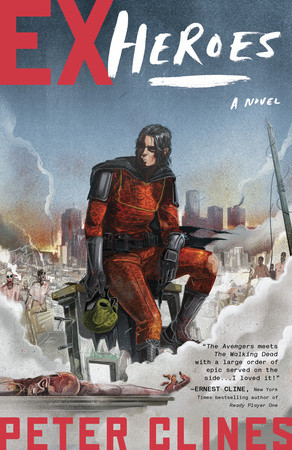 Cover for the Broadway Books reissue of Ex-Heroes

2)  When I heard about Ex-Heroes, the first thing that came to mind was “what a great idea,” quickly followed by “why didn’t I think of that?”  How did you get the idea to put superheroes in your zombie novels?

Well, to be fair, it’s not a terribly new idea.  Zombies have been showing up in mainstream comics for years.  Heck, if memory serves, when John Byrne took over the Superman titles in the mid-eighties he had Superman fight them in Action Comics.  I think it was a Phantom Stranger team-up.

I think what’s new about it is that it’s superheroes actually fighting a full-scale zombie apocalypse.  One of the Big Two comic companies announced years ago that they were going to do a Romero-style zombie invasion in their universe and I got so excited.  An honest crisis like that is where you get to see heroes at their best and their worst.  It’s such a great setting for serious action and drama, but also great heroic moments.

The book they did, though, was… well, I understand a lot of people liked it, but I just thought it was such a wasted opportunity.  In my eyes—as a horror fan and a long-time comic fan—it just did everything wrong.  Thinking about “how I would’ve done it” was one of the sparks that started Ex-Heroes.

3)  With Ex-Heroes heading over to Crown / Broadway, what are your future plans with both Permuted Press (and Random House for that matter)?

To be honest, I’m not sure.  I don’t mean that in some scheming way, just in an honest “we’ll have to see” way.  I’ve got crazy hopes and things I’d like to happen, yeah, but I’m also a realist.  If they’ll have me, I’d love to keep working with Crown and doing stuff with their Broadway imprint, but I’m sure it all depends on how the Ex-Heroes series sells.  This is a business after all, and they’ve put a ton of work into re-launching the series.

And I’m still going to be working with Permuted—they’ve got 14, my Robinson Crusoe horror mashup, The Junkie Quatrain, and a bunch of anthologies I’m in (including a new one called Times of Trouble, about time travel gone horribly wrong).  If it wasn’t for them I wouldn’t be where I am now.

4)  While I first discovered you because of your zombie superhero novels, you also had a great year with 14.  What’s your elevator speech on that novel?

14 is a book I wanted to write for about a year and a half but things kept getting in the way.  I kind of lucked out that I had another project lined up and when the time came to start it Jacob Kier at Permuted told me to hold off.  He’d just bought a book from another author—Bryan Hall—that had a couple similar themes and ideas, and he didn’t want two books competing against each other.  As it happened, Permuted had just broadened their scope a bit, so to speak, as to what they were accepting, so I pitched Jacob the idea for 14 (which was called The Apartment at the time) and he loved it.

At its heart, 14 is sort of a horror-mystery-adventure story.  It’s about a very regular guy named Nate who moves into an old apartment building in Los Angeles and starts to notice unusual things about it.  Individually each little them is just kind of odd, but as they start adding up there’s a whole greater pattern of weirdness.  And it’s also about forming a community and how people become friends.  It’s tough to say much about it because it’s a slow-burn mystery that keeps building through the book, and I’m very anti-spoiler.  Nothing sucks more that getting something out of context and having all the strength and fun sucked out of a twist or reveal.  My original one line pitch to Permuted was “LOST set in an apartment building,” and I’ve been very flattered to see a lot of other people making the same comparison.

Well, right now I’m trying to juggle work for the re-release of Ex-Heroes and Ex-Patriots, plus edits on Ex-Communication and trying to finish a fourth Ex-book in time for an October release.  Then I’ve got a couple of conventions.  And then I might sleep for a week or two.

After that… I’ve got an idea for a new series.  Something a bit more real-world grounded.  Well, as real-world grounded as I can get, anyway.  And then, if people want it, maybe another Ex-book.  Or two.  It’s more important to me to have a good, entertaining story to tell than to crank out another book just to keep the series going.